skip to main | skip to sidebar

Onionville, MN - A federal jury Thursday found a 32-year-old single mother guilty of illegally loaning books to friends and family members without paying royalties and fined her $1.9 million. The criminal, Jammie Thisis-Redunkulous, is also suspected of clipping magazine articles and cartoons and illegally distributing them to the same posse.

RIAA (Reading Industrialist Association of America) has brought more than 35,000 lawsuits against alleged illegal book lenders. "We feel this fine is completely reasonable and in line with the severity of the crime" RIAA spokesperson Carol McDuck said. She cited Minnesota statute 609.205 which sets the maximum penalty for intoxicated vehicular manslaughter at no more than $20,000. "If community standards allow for a $20,000 fine for such a comparatively minor infraction, surely one would expect at least $2 million for such vile, unauthorized 'lending'!"

The RIAA now plans to go after people who browse in bookstores and don't buy any books. McDuck said she believes the problem has reached epidemic proportions. "People are blatantly stealing words from books in bookstores all over the country. The authors don't get paid a penny for these thefts," McDuck claims.

Reports have recently surfaced that the defendant may have a long history of skirting the law. A photo found on Facebook allegedly shows her posing next to the Mona Lisa while on vacation in Paris, smiling smugly and defiantly. A spokesman for the estate of Leonardo DeVinchi claims no records can be found of the defendant having paid for the legal rights to use image.

McDuck went on to say that illegal lending could bring the publishing industry down in the same way cassette tapes destroyed the music industry. "We must be vigilant!"

Note: this is a parody of the equally ridiculous prosecution of Jammie Thomas-Rasset's for illegally downloading music.
Posted by Jim Klus-Salisbury at 9:14 PM No comments:

Downloading is not a crime - it's good for business! 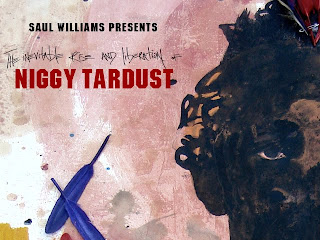 Turns out the brilliant Chicago musician Saul Williams is also quite a businessman as well. He gave away his best album and was rewarded handsomely. He released The Inevitbale Rise and Liberation of Niggy Tardust online with two payment options. One could download it for absolutely free, or one could pay $5 for a high fidelity version that also included a .pdf file of original art and some other goodies - but the same exact songs. Over 200,000 downloaded it for free and only 60,000 paid for it, so he lost out on a lot of revenue - right? Well, actually he had never sold more than 30,000 copies of any of his previous releases, and his live shows started frequently selling out. And, most importantly, he reached thousands of new ears who had never heard him before - and likely would not have otherwise. He says he has also had the added under-the-table revenue of a bunch of kids at his shows who give him $5 bills saying they didn't have a credit card, so they couldn't pay to download it online. When is the record industry going to realize that downloading isn't a threat? In fact, they might still be saved if they rise from their death bed and use their remaining energy and resources to fight for downloading instead of against it! Why are so many artists able to figure out how to make money through free and cheap downloading, while the buggy-whip selling industry execs can only waste their time siccing their lawyers on people they should be courting as customers? And BTW, if you haven't heard the album - you really need to download it, buy it, steal it, rip it or do whatever you have to do - it's a masterpiece!
Posted by Jim Klus-Salisbury at 9:40 PM No comments: 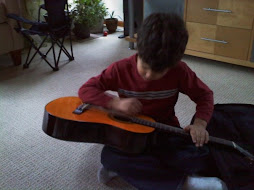